Expressions of Solidarity in Memory of Galeano

After reading the main memorial document for Galeano, Subcomandante Insurgente Moisés told attendees in La Realidad that they could visit his grave to express solidarity with his family, companion, and the Zapatista support bases (BAZ).

Thousands of support bases, along with adherents of the Sixth Declaration of the Lacondona Jungle, formed an endless line in the hope of catching a glimpse of Galeano’s grave. One by one, they travelled from the centre of the Caracol towards the community of La Realidad, arriving at the small backyard where his body now rests. And when they arrived, a compañera coordinated their visits:

“Yes”, she answered, “to further commit ourselves”.

A constant circle of balaclava-wearing Zapatistas surrounded the tomb in a form of embrace. With military salutes and left fists raised, each one passed in front of the grave, placing a stone on its edge. Made out of white stone, the tomb was covered with flowers, adornments, and numerous candles.

“And why the stone, compa?”, someone enquired.

“Each person committed to the struggle leaves a stone because, just like Galeano, it is a symbol of resistance until death”.

The act of leaving a stone may also represent the strength that people’s hearts need in order to cope with Galeano’s unexpected death. Adherents of the Sixth also left stones to show that the construction of Other Worlds would continue.

The pain was left behind, and the comrades present committed themselves to continuing with hope in the construction of an autonomous, anti-capitalist society, without asking for help from the government. Through their own independent creation of such a society – with freedom, democracy, and justice – they aim to follow the example set by Zapatista support bases every day.

Adapted from a translation that originally appeared at http://martamoli.wordpress.com/2014/05/25/para-comprometernos-mas-visita-a-la-tumba-del-companero-galeano/ 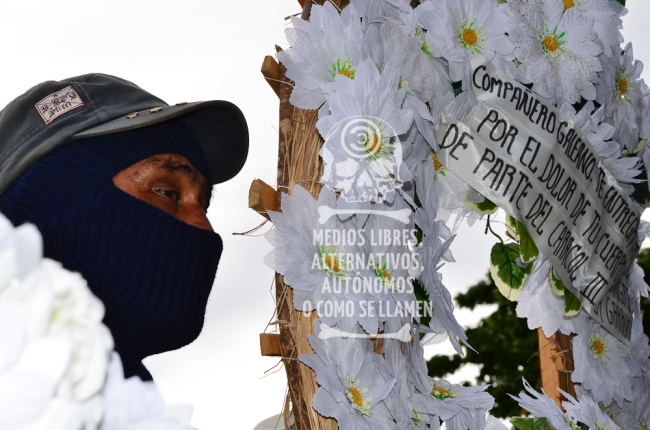