Last weekend, 28 charred bodies were found in Iguala, Guerrero, in what was another in a long line of mass murders in Mexico since the drugs trade became more prominent in the 1990s. This time, however, the BBC reported that “there are strong fears” that some of the “28 bodies found in six mass graves on the outskirts of Iguala… may be some of the 43 students who went missing after a protest in the city in which police fired at their bus on 26 September”.[1] On October 7th, Global Voices Online reported that a guard at the burial site claimed the victims had been “burned alive” and that, while “some of the remains were complete”, others “were in pieces”.

The students, who had been protesting “against job discrimination against teachers from rural areas”, were “ambushed by police” whilst on a bus. Three students were “killed at the scene”, along with “a football player who was in another unrelated bus, a bus driver, and a woman who was in a taxi”.[2] The Sydney Morning Herald reported on October 7th that “Mexico’s federal forces [had] taken over security and disarmed the entire municipal police force” in Iguala as a result. There were suspicions that the “gang-linked massacre” involved “police officers”, and thirty people, mostly police officers (though “not the two giving orders”), were arrested as a consequence. The Herald asserted that the police officers “would be sent to a military base to undergo evaluations while investigators checked whether their guns were used in any crimes”.

According to witnesses, “gang-linked officers” had shot at buses in the area because they were thought to contain students from “a teacher training college known as a hotbed of radical protests”. After the attack, many other students were whisked away in police vehicles. As a result of the night of violence, six people were left dead, 25 wounded, and 43 ‘missing’. Inaky Blanco, the chief state prosecutor of Guerrero, said that “a police officer [had] ordered the students [be] detained” and a “local drug boss” had then “ordered them [to be] killed”. Relatives of the students, meanwhile, have said the students “were taken to punish the school”, which is a “rural institution for poor students and a bastion of revolutionary political activity”.

According to Javier Monroy, member of a support group for relatives of the students, said “these are not the first forced disappearances and executions that we have had to deal with”, and that “we are governed by a society of drug traffickers”. One of the students’ fathers, meanwhile, said police officers “go after students, [but] the real delinquents are in the government”. The Herald backs this statement, saying that “drug traffickers have infiltrated many of the state’s municipal police forces, and often work in cahoots with local councils”. More evidence is that, when the students were ‘disappeared’, local PRD mayor Jose Luis Abarca had taken a “leave of absence”, before ‘vanishing’.[3] His wife, meanwhile, who is often guarded by “tough-looking civilians” and has “alleged family ties to organized crime” – particularly with the Beltran Leyva cartel – did the same. She is under particular suspicion because one of her brothers, Salomon Pineda, “was released from prison last year and is believed to be running the Guerreros Unidos cartel in Iguala, an offshoot of the Beltran Leyva group”. Even a PRD senator has said that “nobody did anything” about her connections to organised crime – “not the federal government, not the state government, not the party leadership”.[4] Abarca has also managed to remain as mayor in spite of having “an investigation and accusations against him”.[5] According to a witness, he apparently told the leader of the organisation ‘Popular Unity of Guerrero’, Arturo Hernández Cardona, “I am going to give myself the pleasure of killing you”. Hernández Cardona was later found murdered in mid-2013 along with two of his comrades.[6]

According to the Associated Press, students from the “radical rural teacher’s college” (named after Raúl Isidro Burgos) are “well-known for blocking highways and other protests”. Nonetheless, Monroy has said that “the brutality of the attack [on September 26th] “made no sense””. Blanco, though, has claimed suspects “have testified that as many as 30 members of the local police force were members of the Guerreros Unidos”. The “imprisoned municipal police deny killing anyone”, but they “had bloodstains in the back of their pickup trucks”, and one even “admitted handing over at least 10 detained students to “people he didn’t know””. As the federal forces entered Iguala on October 6th, the connections between the police and the cartel became more apparent, with the drug gang hanging “banners threatening retaliation if the 22 imprisoned police weren’t released”. They said they would “begin to name the people in the government who support us” if the officers weren’t released.

One professor at the teaching college said that “we’ve lived with threats for decades, but nothing like this had ever happened”.[4] Something that may have changed in recent months, however, is that the school in Ayotzinapa has recently strengthened its ties with anti-cartel groups. For example, it has “long been an ally of community police in the nearby town of Tixtla”, according to The New York Times. Last year, meanwhile, these two forces formed a “broad front… along with the teachers union… to expel cartel extortionists from the area”.[7] In recent years, VICE News quotes a former mayor as saying, “Iguala has become a key transfer point for drugs, and, as a result, a battleground for two criminal groups, Guerreros Unidos and Los Rojos, which are both offshoots of the crippled Beltrán Leyva cartel”. Consequently, anyone getting in the way of cartels would risk repercussions. In fact, many locals have been forced to stop cultivating food and “become lookouts for the cartels” instead, while two students from the Ayotzinapa campus were killed in “a confrontation with police on a federal highway” in 2011.

In September 2014, though, the situation got even worse. A “Guerreros Unidos leader known as “El Chucky” allegedly gave the order to “finish off” the students that were captured” on September 26th by local police. Survivors of the attacks say that “the students had just been protesting outside an event featuring the Iguala mayor’s wife”, and “had also been in Iguala to solicit funds for supplies for their school”. In order to return to the school afterwards, they ‘commandeered’ a bus (which is a regular practice in the region because of insufficient government funding). The fact is that left-wing groups, opposed to the indiscriminate violence and political corruption linked to drug trafficking, are a threat to the continuation of the trade. And the teaching college in one of the strongest left-wing organisations in the region.

VICE News reported that the “rural teachers college [is] known nationally for the ardently leftist politics that guide everything the students do and study”. The walls are allegedly “peppered with revolutionary slogans and images of Ernesto “Che” Guevara… [and] 1970s Mexican guerrilla leader Lucio Cabañas”. There is even a “sign over the main entrance [which] reads: “Ayotzinapa, the cradle of social consciousness””.[8] Another force that has stood up to the drug cartels in Guerrero (but has been repressed by the government as a result) are the community police forces. And indeed these groups joined the search for the disappeared students at the beginning of October. On October 8th, for example, TeleSur reported on how “two community police groups [had joined] in the search for the disappeared students and [had demanded] the resignation of the governor of Guerrero”, Ángel Aguirre Rivero.

Around 500 community police members arrived from the “Union of Peoples and Organizations of the State of Guerrero (UPOEG)” on Tuesday 7th, while members of “the Regional Coordinating Group of Community Authorities of the Montaña and Costa Chica of Guerrero (CRAC-PC)” demanded Aguirre’s resignation, “charging that he is an “accomplice of organized crime,” whose aim is to “silence social protest”. The CRAC-PC said Aguirre, like President Peña Nieto, is “now pretending to be so concerned about these students after years of stigmatizing Ayotzinapa as a ‘breeding ground for guerrillas,’ just because the young people protest and demand their right to education”.[9]

Mexico’s left-wing is divided, but on October 8th it was unified in its demands for justice for the students of Ayotzinapa, for the release of political prisoners (like Nestora Salgado and José Mireles), and for legal action against those politicians involved with drug traffickers. In Chiapas, meanwhile, the Zapatistas (who have commanded immense respect on the Mexican left since they broke onto the political scene in 1994) marched in silence through the streets of San Cristóbal de las Casas with posters saying “your pain is our pain”. Showing solidarity with the students from the Raúl Isidro Burgos teacher training college, they said in a statement that “they are not alone… their dignified rage is also ours”.[10]

Below are photos which I took of the march in Mexico City on October 8th: 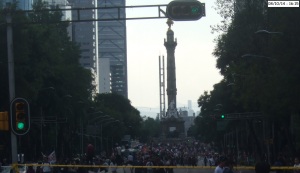 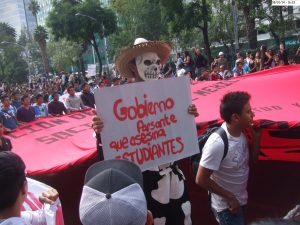 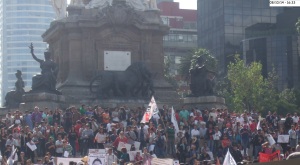 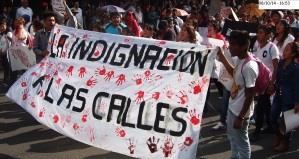 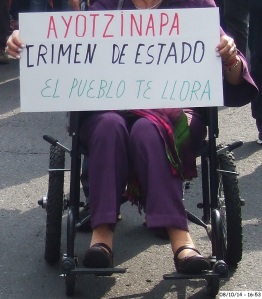 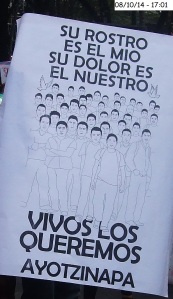 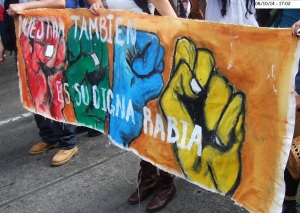 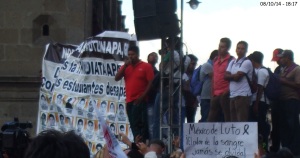 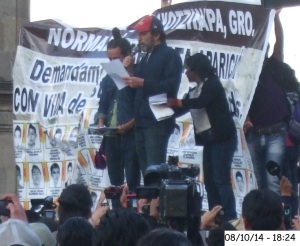 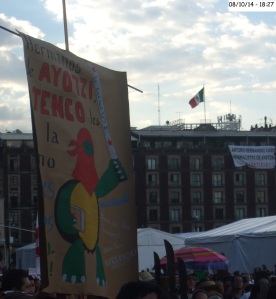 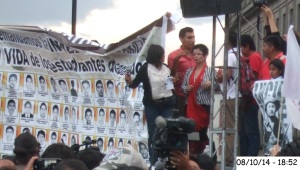 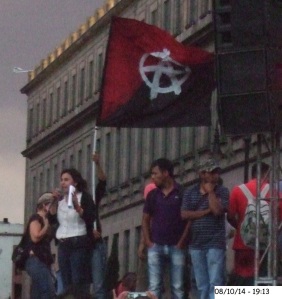