In Memory of Alan Kurdi, We Must Support Rojava

In memory of the young #AlanKurdi and all the innocent people who have died fleeing from Syria, we must intensify our support for Rojava‘s quest for justice, equality, democracy, and peace.

Alan Kurdi’s family fled from the Kobani Canton of Rojava when ISIS launched its offensive a year ago. The embargo imposed on the region by NATO member Turkey simply worsened the refugee crisis by preventing reinforcements from getting to the YPG and YPJ (who had already defended Rojava for years and who bravely resisted the superior arms of ISIS from Kobani for weeks before US airstrikes began). In short, Alan’s blood is not only on the hands of ISIS and Assad but also on Turkish hands.

At the same time, Alan’s blood (and that of so many others) is on the hands of Western allies in the Gulf (like Saudi Arabia and Qatar) for backing Wahhabi Islamists (like ISIS and Al Nusra) instead of helping to forge a peaceful solution to the Syrian Civil War. More war was never, and never will be, the answer. As long as we repeat the rhetoric of the powerful, who insist that military intervention is necessary (out of self-interest), we do more to increase the death count than we do to decrease it. In short, we must recognise that the West’s continued support for Turkey, Saudi Arabia, and Qatar is all the proof we need that the most important issue for our rulers is money – not humanitarianism!

Whether it satisfies our desires to topple Assad and destroy ISIS or not, we must recognise that, for a truly humanitarian solution to the Syrian conflict, an alternative political system needs to be built. And the only real alternative on the ground at the moment is that of the Rojava Revolution, which holds ideals of secularism, cooperation, gender equality, and direct democracy at its heart. In other words, Rojava is the best, most realistic (and peaceful) solution to a crisis that is engulfing more and more of the Middle East whilst pushing more and more civilians to flee for Europe. 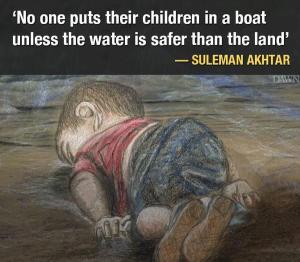 3 Responses to In Memory of Alan Kurdi, We Must Support Rojava