Calle 13: The Ayotzinapa Case Is a Disgrace

“All social causes are important, but it seems to me that the case of Ayotzinapa[1] goes beyond politics: it moves into the field of human rights. It [also] goes beyond Mexico: it is something much bigger…, it is a disgrace!”

These were the words of René Pérez (aka Residente Calle 13) in a press conference before the Calle 13 concert of November 22nd in the Palacio de los Deportes in Mexico City.

Having spoken to one of the parents of the disappeared students from Ayotzinapa, Residente said “…I support these causes because I can’t avoid doing so. It is my duty. For me, when something like this happens in Latin America, it is impossible for me to get up on stage without mentioning it”. At the same time, he insisted “I don’t know why some people in Mexico have misinterpreted [my comments] and been offended”.

When asked what he would say if he met Mexican President Peña Nieto, he affirmed “he is not my president. You [the Mexican people] have to send him that message, protesting peacefully so that unity can be built”.

Regarding his regular social commentaries on stage, Residente claimed he only sought to use the microphone to express himself in a positive, productive way. “The words we express are genuine. We don’t make anything from it. What kind of opportunism would it be? The only opportunity I gain is for someone to shoot me… or for my music to be played less on the radio, for my album to stop selling, or for them to stop me participating in the Grammys. We are just artists and we express what we feel with total honesty. We have absolutely no reason [to be opportunistic]. I’m not interested in being a leader. I just have a microphone, and I use it. I could easily stay out of it all, sing pop music, and live peacefully, not requiring security and not having a scared wife. But I won’t do that. I am going to speak up for people in other countries too”.

Referring to his speech at the recent Latin Grammys, he said “artists aren’t obliged to say things they don’t feel. My parents raised me to have the values I have, so when an injustice like Ayotzinapa occurs, I just do what I feel I have to do”. Mexican artist Lila Downs, Residente insisted, was the only Mexican to have spoken out at the ceremony but, because she did it before being given the award, her comments were not televised.

Rage Against the Machine’s Tom Morello, meanwhile, who would play with Calle 13 in Mexico City, insisted he and many other Americans are following the Ayotzinapa case very closely. At the same time, Residente’s brother Eduardo [aka Visitante Calle 13] insisted that “you need to have balls to do what [Residente] did”.

Through Instagram, Residente invited family members of the missing students of Ayotzinapa to speak during his concert. “There is a law here preventing me from speaking because I’m not a Mexican citizen, but they are Mexican citizens, and they are going to speak”, he asserted.

Translated by Oso Sabio from http://www.jornada.unam.mx/ultimas/2014/11/22/el-caso-ayotzinapa-va-mas-alla-de-mexico-porque-es-una-desgracia-calle-13-3194.html 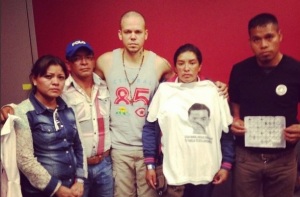 1 Response to Calle 13: The Ayotzinapa Case Is a Disgrace