‘Democracy’ in the UK and Europe

For those unfamiliar with the main political parties in the UK, this is my rough summary:

All of these parties are capitalist parties, though they differ slightly in their interpretations of how to act within a capitalist ‘democracy’.

The 2014 European elections saw Lib Dem votes (-9) lost to Labour (+7) and the Greens (+1), with +1 also to UKIP. The Conservative (-7) and BNP (-2) votes, meanwhile, were lost to UKIP (+10). The elections simply show a shift between the capitalist ‘democratic’ parties – none of which promises a profound shift in the political or economic set-up of the UK. However, the shift does show a significant protest vote against the current government and its austerity policies. It also demonstrates the surprising faith people still have in the Labour Party, and the increasing support for Euro-sceptic, anti-immigration, and nationalist policies proposed by UKIP.

Amidst economic difficulties, the far right usually competes with the ‘left’ for the support of the population, and this is what we are seeing in the increased number of votes for UKIP and the Labour Party. In summary, there is discontent within the nation, but that discontent is being vented – at least among the 34% of eligible voters who voted in the elections – through parties that belong to the Establishment (i.e. they represent or negotiate with the exploitative economic elites that control the country’s ‘democracy’) and don’t promise true solutions for the causes of that discontent.

While other Euro-sceptic parties won elsewhere in the continent, the united left-wing of Greece won the majority of Greek seats under Syriza. Belonging to the GUE/NGL grouping (European United Left–Nordic Green Left), it is committed to “the total change of institutions to make them “fully democratic”; breaking with “neo-liberal monetarist policies”; and a policy of co-development and equitable cooperation”. While neoliberal groups still control the European parliament, this year’s elections saw the GUE/NGL win a record 51 seats, representing a certain beacon of hope in the countries where its parties were successful.

Although severe economic problems and social injustice (like the situation in the 1920s and 30s) often lead to alternative options being proposed (with capitalists almost always supporting fascists in this battle), there will only be real change if revolutionary left-wing movements adopt a more horizontal form of democratic participation. As long as vertical decisions are made by parties, there will still be a dynamic of domination of party leaders over their members and voters. In order to bring about profound change, therefore, community education and participation will be key.

For more information on the election results, see: 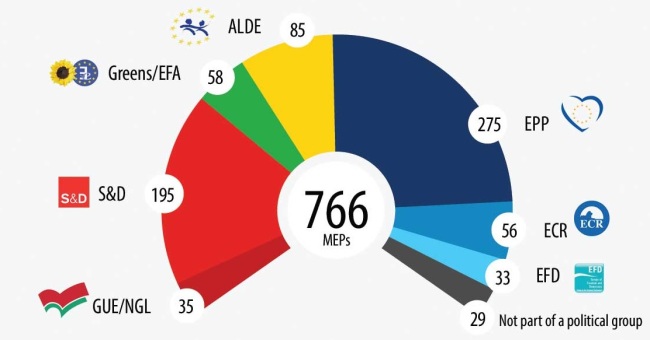