Luis Villoro and the Voice of the Caracol

“The next century will belong to indigenous people”, proclaimed Jesuit priest Ricardo Robles, under the shade of the enormous ceiba tree of La Realidad (five years before that Caracol was created). “Their worldview and their values will open the way for a new era”, he continued.

Having spent many years living among the Rarámuris, almost becoming one of them in the process, Robles was speaking to Luis Villoro, Gilberto López y Rivas and other indigenous leaders whilst waiting for a meeting with the leadership of the EZLN. In different ways and for different reasons, Robles’s prediction was shared by most of those present, and by Villoro in particular.

Villoro and the Zapatista Uprising

In 1994, the Zapatista Uprising disrupted President Salinas’s elite project of authoritarian ‘modernisation’, renewing the hope that a different world was possible and stimulating a wide-reaching debate about Mexico’s future. And, in that process of reflection, indigenous people played a central role.

However, not everyone shared their optimism or empathy with the Chiapan rebels. In the national crisis that followed the rebellion, a number of anti-indigenous prejudices – many of them centuries old – suddenly came to the surface. Opponents of the indigenous struggle jumped on their high horses of arrogance and ignorance all too often. With hatred and naivety, they claimed that recognising the rights of ethnic groups would balkanise Mexico, reinforcing the power of local chiefs and legalising privileges. They affirmed that indigenous communities were trying to establish reserves like American Indians in the USA, denouncing what they called attempts to legalise the remnants of an antidemocratic past.

Opposition to the recognition of indigenous rights came from all fronts, as politicians, lawyers, and academics challenged what they judged to be an attack on Mexico’s national integrity and a step backwards for the nation’s fragile democracy. University figures such as Roger Bartra, for example, spoke of how “the indigenous cultures are a mere collection of ethnic ruins that have been left behind after the destruction and liquidation of the best elements of indigenous traditions as a result of modernisation”.

In this discussion, Luis Villoro played a key role. Together with indigenous leaders and intellectuals like Pablo González Casanova and Alfredo López Austin, he used his political authority to back the indigenous cause and, with patience, tried to explain the falsities of his opponents’ arguments.

The philosopher had encountered many of these fallacies before, having previously reflected on them in depth. In his book The Great Moments of Indigenism in Mexico, written in 1949 and reedited at the insistence of Guillermo Bonfil in 1987, he tore apart the “history of ideological cover-ups” regarding indigenous people – something practised by societal elites for centuries. His debate with the opponents of indigenous rights after the Zapatista Uprising was, in part, a return to the debunking of untruths that he had undertaken in that book.

Editing books and defending indigenous rights, however, was not just an intellectual pursuit for Villoro. In a discussion with his colleague Carlos Oliva about the roots of his philosophical reflections, he spoke of how his book was inspired by an overpowering childhood understanding of “the poverty and destruction of indigenous communities” and the “profound wisdom” that could be found within them. And, in spite of not being indigenous himself, he had always felt that it was possible to embrace and “get closer to the Other” – in this case indigenous communities, and that there was value in doing so. As a result of this belief, he was able to tear down his own personal barriers.

From the very beginning, Villoro saw the Zapatista Uprising as the first manifestation of a new wave of indigenous consciousness in Mexico. It was a show of ethnic discontent and an insistence on the recognition of the indigenous right to autonomy that would spread throughout the country. “Chiapas”, he pointed out, “is simply the first announcement of rebellion in the very soul of Mexico”. With his philosophical motifs of reformation of understanding, the choice of lifestyle, and having a firm grasp of national history, he judged the 1994 rebellion not as a local problem but as the forerunner of a new form of thinking and living – an alternative to ‘modernity’.

He had reflected for many years on the end of two central ideas in modern thought, derived from universal and singular reason: the Nation State and progress towards a rational culture. He had also reflected on socialism as one of the expressions of such modern thought. And, with the arrival of Zapatismo, he used this theoretical arsenal to analyse, explain, defend, and debate with the movement with outstanding clarity and passion.

Villoro was never a Marxist, but he studied the school of thought in depth, using many of its conceptual tools creatively in his own intellectual work. He was, however, a moral socialist, a revolutionary in his own way, and a believer in the role of the People in the crafting of history.

“Socialism”, he wrote in his 1974 work Political Signs, “is not only based on a scientific theory of society and history, but also on a choice of values: the choice between the liberation of humankind and the dehumanising and oppressive State”.

Analysing the Chilean Coup of 1973, he concluded that, in Latin America, “revolution is not a dream of hot-headed adventurers, but the only escape from the violent siege of those who wish to subjugate us; it is not the destruction of democracy but its true attainment; it is not crime but the only defence we have against crime”. The alternative, he affirmed, could only be built upon a base of authentic and independent popular mobilisation, capable of fighting for its own goals. Such a movement, he concluded, would need to propose as an objective the adoption of a different model, which could only be socialist.

But what type of socialism was the author of Plural State, Plurality of Cultures referring to? In Marx, he claimed, there are two irreconcilable elements mixed together: that which aims to be scientific and that of political action as a decision of values – a moral choice. For Villoro, the claim of scientific Marxism is erroneous, and socialism is simply the idea of adjustment – an ethical demand.

Two decades later, after the fall of the Berlin Wall and the disintegration of the Soviet Union, and with the ‘triumph of neoliberalism’ as the backdrop, he again spoke about the meaning of socialism. Born from the rationalisation of an ancient passion which has been present throughout history, he says, socialism is simply the yearning for justice and solidarity, and the dream of a community in which individual interests coincide with community interests. He saw it as an urgent task to claim socialism’s character as a moral programme.

Liberalism, he affirmed, cannot solve the problems that led to ethical thought. What causes inequality and injustice – in the form of marginalisation and unemployment in developed countries and poverty and backwardness in the Third World – is the competition of the capitalist market. And that Market knows nothing about justice.

While liberal ideology contains no programme to deal with the evils of the Market, neoliberalism is even worse, promoting competition between individual interests in the Market and shunning any sense of community. For Villoro, this system is born from a vacuum, marked by the absence of any recognisable sense of historical consciousness.

Meanwhile, regressive ideologies like nationalism and religious fundamentalism, which have brought the world to the point of destruction, are capable of filling, in a negative way, the vacuum of consciousness left behind after the end of State socialism. Such ideologies, according to Villoro, give individuals hope of forgetting about their abandonment and feeling like part of a community.

In After Scientific Socialism, Villoro explained that, in order to confront these tendencies, a new way of thinking is necessary. And such a system of thought would need to “give a new rational expression to the secular passion for equality and community, in which the supreme values that socialism fought for were recuperated. The society driven by competition between individual interests would need to be replaced by one of community solidarity in which the common good prevailed”.

Villoro listened to the voice of the Caracol in August 2003, when Zapatistas announced publicly the creation of their Committees of Good Government. This autonomous form of government would focus on ‘ruling through obeying’, and would aim to repair damage rather than to punish. Solidarity, forged by work in the community, would replace the idea of individual benefit. The voice of the Caracol is that of an autonomous community, in which everyone enjoys the same rights, feels the warmth of friendship, embraces the hope that a different society is possible, and lives with dignity.

The philosopher found in the Zapatista Uprising, and the EZLN experiences of autonomy and self-management, a movement based on the ethical values he had defended throughout his life, and one that was capable of transforming society. He also found in the EZLN the materialisation of the secular desire for justice that preceded socialism and brought it into being.

He saw in the indigenous communities the proponents of an independent movement with enough power to end the fictional domination of ‘modernity’. It was a movement capable of moving from a homogenous State to a pluralist one, in which differences were respected and radical democracy was the aim. It had the vision of moving from a centralised government to a participatory democracy – from individualist association to true community.

In the resistance of indigenous people, he found the key to the achievement of coexistence, with different values that were capable of bringing about radical change in the structure of society. In the people of the American continent, a conflicting language to the modern West had been found, spelling out its dreams through the wishes of the community: union with nature, cooperation in work, and celebration in solidarity.

Just as Robles had said back in La Realidad, Villoro also warned that the twenty-first century would belong to the indigenous people – that their vision and values would open the path to a new era. And, right until the end of his life, he defended that conviction with reason.

“Philosophy”, he explained, “is not a profession, but a way of thinking – one in which, through hard work, one constantly tries to conceive the Other, without ever understanding it completely”. And in the attempt to understand it, he said, one has to deal with numerous complexities and doubts.

For Villoro, philosophy was “truthfulness in the face of prejudice, illusion, and deception; authenticity in the face of alienation; and freedom in the face of oppression”. And, true to himself, his values, and his convictions, he was, in his own way, the philosopher of the Caracoles.

Translated and adapted by Oso Sabio from an article by Luis Hernández Navarro, originally posted at http://www.jornada.unam.mx/2014/04/06/sem-luis.html 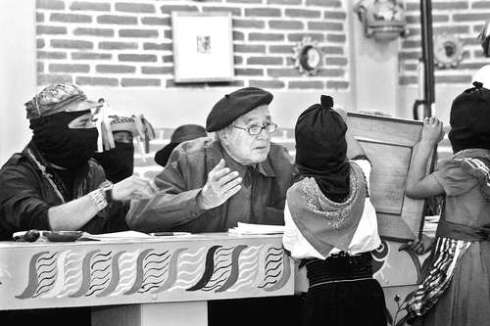