31-01-14 Mexico City – A Little over four months since they were violently evicted from the Zócalo (the main square of Mexico City), teachers from the CNTE union have returned to what is formally known as the “Constitution Square” to reaffirm their rejection of structural reforms made by the PRI’s neoliberal president Peña Nieto. In particular, they oppose the application of laws regarding the country’s education system.

Dissident teachers from Oaxaca, Michoacán, Guerrero, Durango, Campeche, and the State of Mexico, among others, set off from the Monument of the Revolution and headed towards the Zócalo, where they met for a meeting led by their national leadership. At the end of the rally, they chanted slogans against the privatisation of the national energy company PEMEX, and in defence of public education.

“We have returned once again, after the eviction of September 13th last year, to let them know we are still here. We haven’t gone away and we’re not going to surrender. They won’t destroy our movement!” affirmed members of the CNTE. According to the police of Mexico City, over 500 teachers are participating in the protests, in which members of the Mexican Union of Electricians are also present.

At the start of the rally, the Secretary General of Section 22 of Oaxaca, Rubén Núñez Ginez, reminded members that, for the first time since September, the dissident teachers would return to the Zócalo, where they would reaffirm their rejection of the modification of Articles 3 and 73 of the Mexican Constitution.

The union’s leader informed the media that, in the states where the CNTE represents the majority of education workers, there will be acts of protest, such as rallies and marches, to demand that the government cancel both the educational reform and the application of other structural reforms. He also made it clear that there is no current negotiation in process with the capital’s government to remove the camp where union members have been based in the Republic Square since their eviction from the Zócalo last September.

Translated and adapted from http://www.jornada.unam.mx/ultimas/2014/01/31/marchan-maestros-de-la-cnte-del-monumento-a-la-revolucion-al-zocalo-3945.html 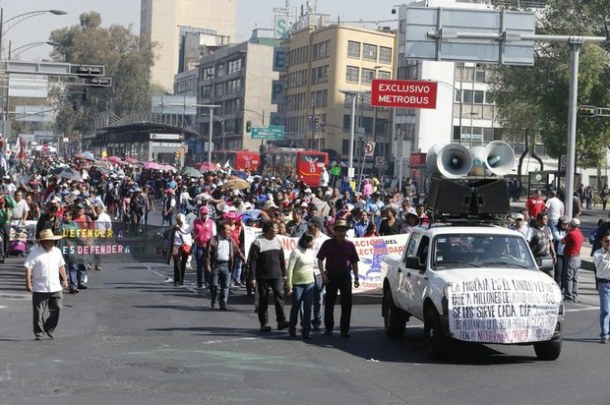