As an overview of Mexican politics, and an explanation for why the Zapatistas continue to build their own political structures outside of the control of the Mexican state and the civilians have organised themselves into community police forces (autodefensas), here are some news articles from the first two days of 2014.

02-01-14 – OAXACA, Oax. – Today, the ex-mayor of Santiago Amoltepec, Pedro Luis Jiménez, was detained. He was accused of several crimes, including homicide, land invasion, and funding an armed group.

02-01-14 – MÉXICO, D.F.- The US federal judge Dana M. Sabraw refused Serafín Zambada Ortiz’s request to postpone his trial for drug trafficking. Zambada, 23 years old, is the son of Ismael “El Mayo” Zambada – one of the leaders of the Sinaloa Cartel (led by one of the richest men in Mexico – and most powerful drug lord in the world – Joaquín “El Chapo” Guzmán, who escaped from a maximum security prison in Jalisco in 2001).

Zambada Ortiz, a US citizen, was arrested in Arizona last November upon entering the United States. He faces charges of conspiracy to bring 500 grams of Methamphetamine and 5 grams of cocaine into the USA.

02-01-14 – MÉXICO, D.F. – Faced with a lack of cooperation from Mexico’s Attorney General (or PGR), the country’s Freedom of Information and Data Protection Institute (IFAI) has demanded the transparency of information related to the number of fields and hectares of drugs destroyed between 2012 and 2013. (Sinaloa and Sonora are currently the states with the greatest concentration of illegal drug plantations).

01-01-14 – CHILPANCINGO, Gro. – A ‘narcomessage’ was attached to the bodies of two executed men found today in the centre of Chilpancingo. In spite of pólice and military presence in the streets of the city, security has not improved and violence has not been ended.

“This is what happens to kidnappers, misers, and extortionists. Sincerely, La Empresa [The Firm].”

The PRI mayor Mario Moreno Arcos, who has claimed he is powerless to control the violence caused by drug cartels, has declared Chilpancingo as a safe and peaceful place. However, the local authorities actually promote a festival, with public money, which is considered to be the city’s ‘narcofair’. The government is led by the ex-PRI, and now PRD, governor Ángel Aguirre Rivero (responsible for the violent eviction in Chilpancingo of protestors from the Escuela Normal Rural de Ayotzinapa in 2011, during which two students died). Together with Moreno’s administration, Aguirre subsidises and promotes this event which, instead of encouraging tradition and culture, praises ‘narcoculture’ in an area devastated by kidnappings, extortion and murder. The main attractions are musical groups from Sinaloa who sing ‘narcocorridos’ which praise the campaigns of the Cartel led by Ismael “El Mayo” Zambada y Joaquín “El Chapo” Guzmán.

Businessmen at the fair have denounced the climate of fear in which they work, plagued by criminal extortion or, if they don’t pay the cartels the cut they demand, expulsión from the fair. In fact, even the organisers of the festival have recognised publically that extortion of participating businessmen was something “normal” that “no-one could avoid”. Moreno pointed out that he wasn’t “Batman, Superman, or the Lone Ranger”, and couldn’t do anything to stop the violence in the state. [Such self-stated government incompetence and powerlessness is precisely why groups like the autodefensas have arisen in Mexico.]

01-01-14 – MÉXICO, D.F. – Presumed members of the Gulf Cartel distributed games and food-baskets on Christmas Eve in Tampico, Tamaulipas, according to a video circulating on YouTube.

“Merry Christmas from the Gulf Cartel”, says a man while distributing toys to a poor woman in this city plagued by violence (caused by fighting between different drug cartels). 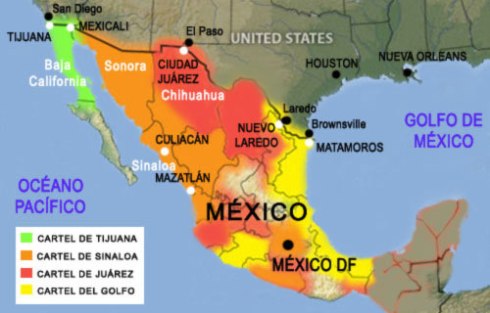