MEXICO: The New Year Advance of the Autodefensas in Michoacán

08/01/14 – In the main square of the Parácuaro municipality of Michoacán, citizens showed their support for the community autodefensas (Self-Defence Forces), which had arrived the previous Saturday to fight off the Caballeros Templarios (‘Knights Templar’ Cartel) that controlled the area.

The autodefensas of Tepalcatepec, Tancítaro and Buenavista had asked the inhabitants of the area to decide whether they wanted them to stay or not, while at the same time announcing the surrender of one of the chiefs of the Caballeros Templarios. In response to the question asked of them, the families emphasised their willingness to form part of the autodefensas’ security commissions, and accepted their offer of protection until they could form their own self-defence groups. Women, children, elderly people, peasants, and small businessmen were all present at the meeting, showing their commitment to ending the domination of the Caballeros Templarios.

The police and army have little meaningful presence in these territories, and the autodefensas provide an alternative to living under the yoke of organised criminals. These groups do not seem to have a clear, coordinated political agenda (like the Zapatistas, for example), but they do represent the embryonic stage of a popular resistance to the problems of the nation that exists outside of the traditional political institutions.

The autodefensas told the assembled citizens that they would continue freeing municipalities until they arrived at Apatzingán – considered the bastion of the Caballeros Templarios. Meanwhile, they promise to protect the communities they have liberated with patrols and barricades.

Fifteen kilometres away, other groups – possibly affiliated to the Caballeros Templarios – blocked the main road to stop the advance of the autodefensas. They hung a sheet from a bridge asking President Peña Nieto to stop supporting the autodefensas. The secretary of government Osorio Chong has, however, said that the government believes the autodefensas are ‘on the edge of the law’ – a comment showing an indirect criticism of the groups that have proved popular in the municipalities where the drug cartels have been force out.

Apatzingán is home to around 130 thousand inhabitants who have suffered both violence and exploitation at the hands of criminal gangs, along with a worsening economy as a result of the closure of several businesses. Some sources in Parácuaro say that those who have been involved in the opposition to autodefensas have been pressured or encouraged by the Caballeros Templarios, claims that have been denied. 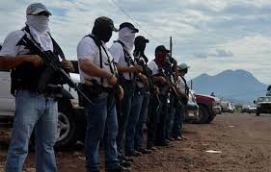