Twenty Years on from the Zapatista Uprising

What is the significance of the Zapatistas today? Do they still exist? Have they actually achieved anything? Will they rise up again?

Mexico has changed in the last twenty years, and so have the Zapatistas. Though their fight is no longer in the media as much, it has not waned. Outside Chiapas, Mexico has been disfigured by drug wars and increasing privatisation.

Writer and journalist Herman Bellinghausen, who has followed the EZLN closely in the last 20 years, says that “they are where they always were” and, in fact, in “better conditions”. They “have proved that it is possible to live well under a different form of government”. The autonomous Zapatista municipalities have become self-sufficient in terms of food, health, schooling and accommodation, and have made democratic decisions through participatory councils of ‘good government’. In fact, Bellinghausen suggests that the preventative medicine practised in these communities is cheaper and better than in the rest of the country.

Could the uprising happen again?

Bellinghausen emphasises that the conditions in Mexico are very different today, and that the isolation in the region which allowed the uprising to take place is not the same today. The uprising had been very well planned and had been brewing for years, as the “Lacandona jungle – the mountains of Chiapas – were completely isolated and forgotten about”. The government was not paying attention, and the Zapatistas took advantage of that situation.

Although the same kind of uprising is unlikely, the desperation in the country is probably greater than it was then, and for more people. The situation in Mexico has deteriorated, and Chiapas almost seems like a safe-haven. There is governability and peace, and tourists can pass through without encountering the drugs trade or vast numbers of migrants – things that are harder and harder to avoid in other parts of Mexico. In this aspect, Zapatistas don’t represent a force of instability, but precisely the opposite – one of order.

The Current Situation of Indigenous Communities

On one hand, the Zapatista indigenous communities have learned skills of self-government and self-sufficiency, but at the same time they have done it without help from the federal government. Also, their territory is coveted by large multinational corporations, interested in mining, wind-farms, tourism, housing, or roads – just to mention a few. As there are few indigenous representatives in the federal government, the voices of indigenous Mexicans are seldom heard or respected, and communities are being increasingly displaced from their ancestral lands.

If the San Andrés Accords had been respected, maybe the situation for indigenous people wouldn’t be quite as disastrous as it is today. However, the government didn’t feel obliged to respect them, and would have found it difficult to do so give the free trade agreement which came into force at the same time as the Zapatista uprising. At the same time, despite failing to stop the increasing privatisation in Mexico, the EZLN at least managed to protect its own communities in Chiapas, which still stands as a beacon of hope for change in the rest of Mexico.

The Legacy of the Uprising

The EZLN has definitely left its mark in history books of Mexico, and more specifically in Chiapas. It has shown strength and determination over the last twenty years and, as Bellinghausen puts it, “with their silence they have made us talk”. The uprising was undoubtedly an audacious decision, but it was born out of a desperate need for change. Today, there is unfortunately an even greater need for change, as violence has grown exponentially. The increase in the number of community police forces is a sign that other parts of the nation are also responding to the desperate situation they find themselves in.

The Zapatistas have won a bittersweet victory, succeeding for almost twenty years in governing themselves. They have built something unique and different. Unfortunately, they have only achieved it in their small corner of the country. The rest of the country, meanwhile, is in dire straits, and they haven’t been able to do anything to change that.

It is worth pointing out, however, that the Zapatistas have suffered setbacks themselves over the last two decades. For example, while they wanted to leave their weapons behind, they have found themselves faced with local and national challenges, which force them to remain prepared for confrontation. In spite of this constant threat and state of preparation, though, they have been able to resolve most conflicts in a peaceful way.

In an environment full of paramilitary groups, corruption, libel, massacres, and disappearances, the Zapatistas have kept their distance. A large part of their communities is made up of youngsters, who have been formed outside of this traditional environment. The achievements made in their communities should be held up as an example for the rest of the country.

In Zapatista territory, advances have been made through the commitment of the community, far from the world of political promises, propaganda, and million-dollar campaigns – as characterised by the current president or his protégée in the official government of Chiapas. The Zapatistas have placed all of their efforts into ensuring stability and governability, rather than focussing on making their actions known to the rest of the country.

The unique experience of the Zapatistas is a living example which shows no signs of disappearing. It is a lesson to be learned and a beacon of hope, especially in a nation like Mexico which is full of such immense inequality, violence, and injustice.

Translated and adapted from http://www.newsweek.mx/index.php/articulo/7225 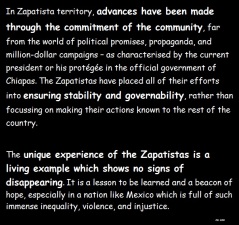